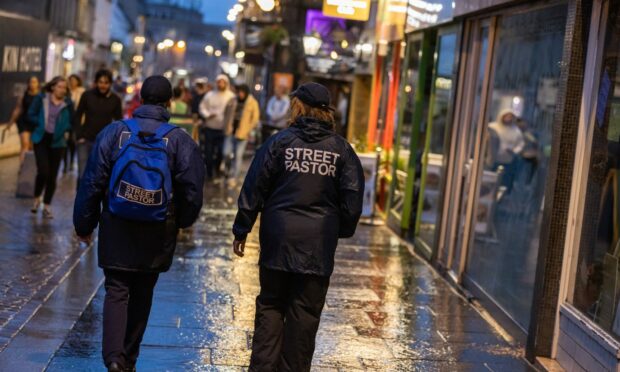 While revellers enjoy the return of the jovial atmosphere around Inverness, the street pastors play a vital but often unseen role in keeping people safe.

Getting together once a month on a Saturday night, a team canvass the busy Inverness city centre offering help and support to people in need.

The pastors come prepared for anything that could occur during their five-hour stint on the streets.

They carry supplies such as water, lollipops, blankets, phone chargers and flip-flops for women who have had enough of their high heels towards the end of the night.

The team, who usually work in two sets of pairs, is equipped with radios to communicate with the door staff on the High Street and Church Street.

Many bars and pubs are near the Town Hall and down Church Street, including Gellions, Botanic House, Revolution and the Black Isle Bar.

The pastors canvass the area, engaging with people who are more chatty due to alcohol and doing small things to prevent potential violence, such as binning glass bottles.

On Saturday, June 11, the street pastors went out for their monthly patrol with the team consisting of team leader Ann Danson, Lesley McRoberts and newly commissioned Gavin MacKenzie.

‘We do what we can to comfort.’

Mr MacKenzie has worked with the street pastors since the beginning of 2020 but because of Covid-19 has only recently become fully commissioned to help on patrols.

He said: “I heard that the Inverness Street Pastors were looking for new people, so I decided to find out more about it.

“I thought here is a way I can actually help people rather than sitting at home watching TV on a Saturday night.

“You have to look at each individual you help. People find themselves in situations where they are lost or vulnerable, and we can help them to an extent.

“We are doing it because we want to help people and want them to know we care about them.”

The role involves pastors being able to calmly and effectively communicate with people under the influence of drugs and alcohol and who may be behaving irrationally.

Help for the homeless in Inverness

As members of the Christian church, the team help those in need by employing the motto “Listening, Caring, Helping”.

Team leader Ann Danson has been working with the street pastors for eight years and knows how vital the service is.

She said: “We spend a good deal of our time talking to folk who are out begging on the streets. A few of them are completely homeless, but that’s rare these days.

“Most of them have at least somewhere they can stay but feel the need to beg to supplement their income, so quite often we’ll stop and chat, so they feel somebody is there to listen and talk to them, which is important.”

While the pastors train extensively for anything, some situations require common sense and teamwork to resolve.

The incidents for which training has been most useful are during a medical emergency.

The pastors can administer medical aid such as Naloxone, a nasal spray that helps reverse a drug overdose.

Thankfully, none of the pastors have had to administer the potentially life-saving treatment but are still trained if needed.

While many volunteers are keen to return to help people, Covid has prevented many from returning, so numbers are down.

Before the pandemic, the team of street pastors had over 30 members.

However, following the return in 2022 the team is now down to around 20.

Mrs Danson said: “Some of us found it easier to come back than others while some of us were a little hesitant as Covid was receding.

“Numbers are down, but by in large, things are getting back to normal.”

There may be a smaller team, but Mrs Danson is confident in the team’s ability to confront any situation and back each member up if the need arises.

All three members were happy to lend a hand during their patrol, like providing a young man with a phone charger so he could call a friend for a lift home.

The team also advise people with friends who are a little worse for wear, such as early in the night when a young man was found on a bench having been sick.

They were able to give his friends some advice to get him safely back to the hotel where he was staying.

One particular incident required the team to take a drunken woman back to her home in Merkinch, more than a mile from the centre.

While not a common occurrence when out on patrol, Lesley McRoberts knows “it was the right thing to do”.

She said: “We are there to listen, and we do what we can to comfort. What makes it different for Christians is that we can pray about it.

“If we have had something particularly hard on a night, we come back to the Hub and talk it through and pray. That’s as much as we can do. That’s it finished.

“We can’t come back in the morning, so we have done what we can at the moment.”

At 3am, the team will fill out a report and pass it on to the prayer team, who will pray for the people who need it.

Passing it on releases the street pastors from the burden that could, if held onto, wear them down when dealing with vulnerable people on the streets of Inverness.

While the Inverness Street Pastors are popular around the city centre on a night out, they are the unseen heroes safeguarding the people of Inverness.

Most single-use plastics to be banned in Scotland from June

While revellers enjoy the return of the jovial atmosphere around Inverness, the street pastors play a vital but often unseen role in keeping people safe. Courtesy of Latest News and Sport Headlines from Inverness | Press and Journal …

Hollywood actress and proud Highland lass, Karen Gillan has married her partner Nick Kocher at Castle Toward in Dunoon at the weekend. Courtesy of Latest News and Sport Headlines from Inverness | Press and Journal …

Inverness Highland Games are returning to the city this summer 200 years after they were first held. Courtesy of Latest News and Sport Headlines from Inverness | Press and Journal …

A ban on some of the most common single-use plastics will come into effect in Scotland from next month, with significant fines for any businesses that don’t comply. Courtesy of Latest News and Sport Headlines from Inverness | Press and Journal …