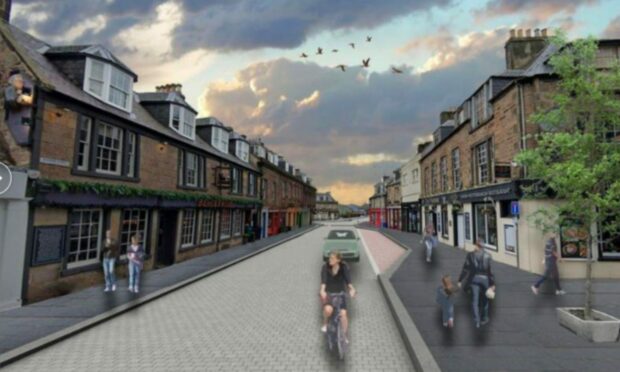 Drastically cutting the amount of traffic on Academy Street in Inverness will make the city safer, healthier and more attractive, supporters of a major plan to change it have said.

Controversial plans to ban most private cars from the Highland capital’s main thoroughfare won the backing of councillors by a narrow margin last month.

The move has angered opponents of the scheme. It remains likely to prompt a legal challenge from firms who say they were not consulted about the plans.

Last week, Highland Council was accused of fraud for the way it has handled the situation.

On Tuesday, we published a statement from the council responding to criticism that cutting the daily number of vehicles using Academy Street from more than 9,000 to fewer than 2,000 overnight would cause chaos on Inverness’s roads.

A spokeswoman told us the city’s other main routes can handle it and Inverness will not “grind to a halt”.

Today, we’re taking a closer look at why people support the scheme.

‘We don’t want Inverness to lag behind’

She has been one of the scheme’s biggest supporters.

Councillor Knox said: “I passionately believe that these proposals have the potential to transform the centre of our beautiful Highland capital.

“It will make it safer, healthier, more attractive and inclusive for visitors and locals alike.

“Across Europe we can see businesses and tourism benefit from attractive town and city centres with limited motor vehicle access. We don’t want Inverness to lag behind our European counterparts.”

A 2015 Scotland-wide study found that pedestrianisation increased footfall by up to 35%.

It also revealed that people walking to high streets spend around 40% more than drivers.

Councillor Knox also cited the example of Exeter as one to follow.

Its footfall increased by 30% after its city centre was pedestrianised.

It was established last year and holds monthly rides around the city for all ages and abilities, on bikes, trikes and scooters.

Its aim is to get kids interested in cycling and helping less confident cyclists gain confidence and experience on the roads.

Sara Ramsey, a Raigmore Hospital surgeon who is a member of the group’s organising committee, is looking forward to the changes.

She said: “There is a real buzz on the High Street. It seems unthinkable it was previously a through road.

“I applaud the support for active travel and the demonstration of commitment to making Inverness a vibrant green city.”

Fellow group member Emily Williams cited evidence that schemes like this encourage people to try a different mode of transport.

She said: “That is vital if Inverness is to achieve its aim of becoming carbon neutral.”

“I hope it will smell less like fumes and the buses can be more reliable because there is less traffic.”

Why is Academy Street changing?

But analysis shows 50% of the vehicles are using it as a through route – rising to 75% in the morning rush hour.

The council argues Academy Street would not be eligible for funding needed to improve it unless cycle routes or traffic reduction measures are identified.

Many people against the scheme in its current form agree with the principle, but are unhappy with what they see as a lack of consultation of local businesses.

Some details are still to be ironed out.

And the strength of feeling around this issue suggests we may be hearing about it for some time.

But none of the backlash we’ve seen against the plans seems to have dimmed the enthusiasm of its supporters.

Councillor Knox concluded: “This is a real opportunity to push for wholescale, effective change to encourage tourism and business development.

“We have to ask ourselves: ‘do we want to prioritise car drivers?’

“Or should we prioritise retailers, business and the economy, pedestrians, active travellers and people with disabilities?’”