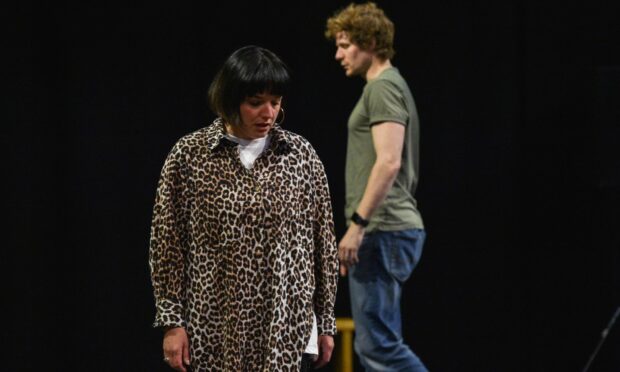 In a rehearsal space in the heart of Eden Court, an intense discussion has broken out about the best way to open an umbrella.

As said brollies are furled and unfurled, on a “stage” marked out in green tape on the floor of the OneTouch Theatre, other actors are wandering around singing, or humming to themselves.

The space is calm but the atmosphere is one of a relaxed intent – sound and lighting and music directors are making notes on laptops, stage managers and crew are busying props to one side, tables and chairs are dotted around, covered in papers and notes.

It’s a quiet maelstrom of activity all building to one goal – getting The Stamping Ground, the new Scottish musical built around the compelling and much-loved music of Runrig, onto the stage of Eden Court, Inverness.

This is the “stagger through” rehearsal for the production – commissioned by Eden Court – with actors running scene after scene.

They are honing their lines, perfecting their delivery, working out where props should or shouldn’t go, the best point at which to burst into song, finessing the cues for the musicians to burst into life.

And at the heart of it all is director Luke Kernaghan, sitting cross-legged on the floor watching intently, taking the odd note and then leaping up, full of praise for the actors on stage before discussing and fine-tuning what he has just seen.

Cue the chat about how best to open a brolly or a later suggestion about how actor Neshla Caplan should pause before exiting the stage after a scene featuring the Runrig song All Things Must Change – “I think there’s going to be applause”.

Even seeing snippets of The Stamping Ground in this early form – complete with a paso doble around an umbrella – it’s hard to disagree with the notion there will be applause. Lots of it.

It’s pretty clear that something special is being created in the heart of Inverness.

“I think this feels already like it has incredible potential to affect and move an audience,” said Luke, chatting during a break in the intensive rehearsals.

“There are moments when I hope audiences will jump out of their seats clapping and applauding because it’s just so much fun and exciting.

“There are other moments that I really hope we bring a tear to your eye… I want people to feel as though they’ve had an incredible experience and a communal experience because that’s what Runrig do.

“Their songs bring people together and that’s what we’re hoping to recreate on stage.”

The Stamping Ground, created by Eden Court in partnership with Raw Material, follows the story of Euan and Annie, who return home to their rural Highland village to find a place much changed.

Their old home has more tourists than locals and even the local pub, the heartbeat of the community, is up for sale.

Two of the actors at the heart of this compelling and relevant story – Neshla and Brian James O’Sullivan – share Luke’s sense that magic is at work as the production comes together.

“I do get the strong feeling we are making something special… and let me tell you, I don’t get that feeling every time,” said Brian, who plays local barman, Fergus.

“But sometimes I’m in something where I think this could be magic and it could go everywhere. That’s how I feel about this show and I hope it comes true.”

“It’s already been creating a buzz within our community of actors and colleagues and that’s exciting,” said Neshla, who had just been working and reworking a scene with fellow actor Steven Miller, who plays Euan.

“The great thing about Scotland is that we are really great at building brand new things.”

As the story of The Stamping Ground – written by Moray’s award-winning playwright Morna Young –  plays out in the rising summer heat, tensions flare, relationships become tangled, and the sense of place and land comes to the fore as the villagers try to band together.

The unforgettable music of Runrig drives The Stamping Ground along

Brian said: “For me, The Stamping Ground is about community, Scottish community and what is happening to communities now, the way the world is changing and how we hope to take ownership over our own community, our own space, while having the rug pulled from under us in so many instances.

“For me, it is an ensemble story about a village, or a community, or a town, trying to remain autonomous and not get lost, dilated or disappear.”

Driving all of this along is the unforgettable music of Runrig, with Morna having gone through the band’s entire songbook to use the lyrics to help create her story, said Luke.

“If you are a Runrig fan, you will love what we are doing with the songs,” he said, adding he is a huge fan of the band.

“If you don’t know Runrig very well you will also be swept up in these beautiful songs. They are like poetry and they are ear worms, they get stuck in your head wonderfully.

Neshla and Brian agree it is the sound of Runrig that gives The Stamping Ground its big beating heart.

Brian said: “What’s great about this show is the lyrics do move the story forward, but they also act as a poetic meditation.

“In every Runrig song I have heard there is mention of landscape, the land, the people of the land, the work of the land, so that created a basis for the whole visual element of the show and the thematic elements.”

Neshla added: “The music is so evocative, it paints its own picture, so it’s easy for us to jump on with that.”

Luke said he was delighted when Runrig’s founding members, Callum and Rory MacDonald, came to visit rehearsals when they were held in Glasgow earlier this month.

“It was such a privilege to show them where we were and what we were doing with the material. It felt like they were giving us their blessing. It was just wonderful to have them in the room. You feel the energy shifted incredibly, just having them there.”

It is not an inconsiderable feat to commission a brand new Scottish musical and get it from an initial concept to a full-blown large scale production on the stage of Eden Court.

Brian likens it to trying to get an ocean liner moving – “It’s vast and there are so many moving parts that everything takes a long time.”

But everyone involved believes in what they are crafting and are confident audiences will love it, too, when the show opens on Monday July 18, after a preview on Saturday July 16.

Brian said: “I would love the audience to come away from this show feeling proud of themselves in some way. I’m not into borders or divisions, but I do think there’s a visceral Scottishness to this show.

“I want the audience to leave feeling elated, happy and moved,” she said, adding she would like people to leave with a pride and understanding of what Scottishness is.

“Runrig fans are fans of what they can tap into, of these lands and this music and it brings them from all over the world and we are aware of that. We just want people to feel they have had a really good night out, and we have entertained them after everything that’s happened.”

Luke added: “I hope people leave the theatre after seeing The Stamping Ground for the first time and think ‘I want to come and see that again, I need to tell my friends about this’.”

The Stamping Ground will run at Eden Court until Saturday July 30 – but it will have a life beyond that, with plans for a Scotland-wide tour for next year.

Luke said: “I think this is a musical that will sing to the Highland audience. I think it’s also something that needs to be seen beyond the Highland,  across Scotland, and actually, for me, internationally.

“Because I think the themes and the story that we’re telling, they’re really special here, and they will resonate beyond.”

His chat with us finished, Luke heads off to join the rest of The Stamping Ground crew for lunch, leaving the OneTouch Theatre deserted, still and quiet.

But that won’t last long. Soon everyone will be back in the room and working hard again with one goal. To make magic happen.

For more information and tickets for The Stamping Ground visit eden-court.co.uk

Everything you need to know about Duran Duran’s Inverness gig