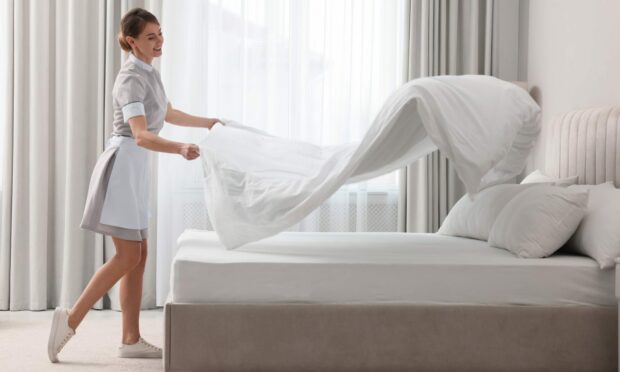 How can the hospitality industry convince wider society it can offer careers and not just a stopgap? Peter Ranscombe investigates.

It is a phrase we’ve all heard again and again from friends and relatives: “Oh aye, wee Peter’s working up at the hotel until he can find himself a ‘proper job’.”

That assumption that working in a hotel, restaurant, bar or tourist attraction is just a short-term option and not a long-term career has echoed down the years and decades.

But how can businesses convince parents, teachers, and other influencers that working in hospitality, leisure, and tourism is a “proper job”?

Most other industries don’t give you the chance to earn up to £1,000 a month in tips. The harder you work, the more money you earn, it’s as simple as that.”

Education is the key, according to Willie Cameron, a director of Highland Tourism, the community interest company set up to develop the region as a holiday destination.

Mr Cameron is also business development director at Cobbs Group, which runs four hotels along Loch Ness and a bakery with a chain of 17 cafes.

He said: “I know we’re on the fringes of western Europe but when it comes to hospitality we really are on the fringes, compared to countries like France, Italy and Spain, where their hospitality individuals have all been treated with high respect, high regard, and treated as a profession,.

“Their training has been better, and their appreciation by the general public has been better. We really need to start the education at a young age.”

In the past, Cobbs Group worked with a school in Drumnadrochit to help pupils learn about hospitality and gain their Welcome Host badge, an old industry qualification.

Mr Cameron thinks the time is right to open an international hotel school in the Highlands.

It could provide training and help to promote hospitality as a profession, he said, adding: “Back in 2014 we tried to set up an international hotel school here at Loch Ness, linked in with the University of the Highlands & Islands (UHI). Unfortunately, the gentleman who was leading it passed away and nobody took up the cudgels.”

Post-Brexit and, hopefully, after the worst of the Covid pandemic, he believes it is now time to re-explore the idea.

His suggestion for a world-class hotel school in the Highlands was echoed by George Stone, a retired university lecturer who has worked with many hotels in the region.

Mr Stone said a hotel school would help to raise the status of hospitality as a career option, and that creating a three or four-year higher national diploma or degree-level course – running from mid-October to early April, with integrated paid placements from May to September – would encourage more young people to train as hotel managers.

He added: “We have the intrinsic problem that hotel work is seasonal. Although hotel managers tell me they are working to build up business in what they call the shoulder months leading up to the peak season, it hasn’t happened in the 18 years that I’ve been working with hotels in the Highlands, and I haven’t seen any significant change at all.

“One way to solve that intrinsic problem is to bring in people who are eager to work for five months – better still for seven months.”

Before Brexit Mr Stone was involved in bringing between 60 and 80 Czech hotel students to the Highlands each summer, but a lack of visas from the UK Government means the group now goes to Ireland instead. It may be possible to bring more overseas students into the Highlands once six-month visas become available.

Highlighting the many opportunities available in the hospitality industry is another key factor, according to Stephen Leckie, chairman of the Scottish Tourism Alliance and chief executive of his family’s chain of hotels, which includes the Crieff Hydro, Ballachulish, Kingshouse and Isles of Glencoe.

Mr Leckie reeled off a list of selling points, from flexibility in working hours and the life skills that young people can develop through their first jobs in hospitality, through to the wide variety of roles, from using technology and social media to marketing, finance, and even tree surgery.

‘You can also have fun in this industry’

He added: “Very few businesses in this industry now pay only the minimum wage but even if they do, there’s the chance to earn tips on top. Most other industries don’t give you the chance to earn up to £1,000 a month in tips. The harder you work, the more money you earn, it’s as simple as that.

“You can also have fun in this industry – you can go to events, or play golf, or go to a Champagne or wine tasting. You don’t get that chance in many other businesses or industries.”

Promoting opportunities in the sector is also important to Shirley Simpson, a lecturer in hospitality management at UHI’s Perth College.

It’s such a diverse and exciting career,” she said, adding: “It doesn’t just have to be working in a hotel – hospitality spans lots of different sectors, whether that’s farm shops, restaurants, bars or all the tourist attractions.

Diageo – Scotland’s biggest whisky-maker and the owner of drink brands including Gordon’s gin, Guinness stout and Smirnoff vodka – is already extoling those virtues to young people through its Learning for Life programme, which includes four weeks of training and a fortnight’s work experience.

The project is run by Springboard, a charity set up by the hospitality industry in 1990 to fill jobs in the sector and help people from disadvantaged backgrounds to find work.

Springboard operations director Inga McVicar said the Diageo scheme had expanded during and after the lockdowns to include one-to-one sessions and more online work, allowing people from Orkney and Shetland to access the training.

More than 5,600 people have taken part in nearly 400 courses since 2014, with 92% of all participants during the past year going into jobs or further training. Trainees have also been able to take advantage of Diageo’s new Johnnie Walker visitors’ centre in Edinburgh.

Diageo corporate social responsibility programme manager Gillian Dalziel said: “It’s not just the Edinburgh cohort that’s been using it, but also the cohorts from Glasgow and Forth Valley.”

Springboard has an education department that works with schools and colleges to promote the industry.

Ms McVicar said: “For young people, it’s about influencing their influencers – parents and teachers and guardians. We have about 2,000 industry ambassadors, including about 900 in Scotland, who can go into schools, colleges and communities and talk about careers.”

How can the hospitality industry convince wider society it can offer careers and not just a stopgap? Peter Ranscombe investigates. Courtesy of Latest News and Sport Headlines from Inverness | Press and Journal …

In a rehearsal space in the heart of Eden Court, an intense discussion has broken out about the best way to open an umbrella. Courtesy of Latest News and Sport Headlines from Inverness | Press and Journal …

Duran Duran will soon perform their biggest hits in Inverness. Courtesy of Latest News and Sport Headlines from Inverness | Press and Journal …

While revellers enjoy the return of the jovial atmosphere around Inverness, the street pastors play a vital but often unseen role in keeping people safe. Courtesy of Latest News and Sport Headlines from Inverness | Press and Journal …