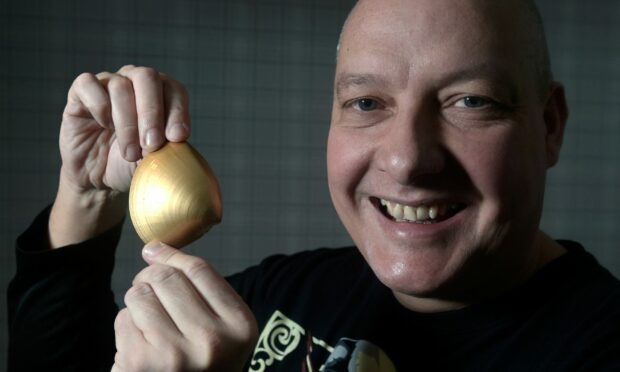 A “golden” early morning trip to East Beach in Nairn uncovered an unusual shell find for an offshore worker.

A collector of large shells, he was amazed at its dazzling bright colour and immediately took it home.

But back home in Inverness, his wife Sarah insisted she thought it was painted, rather than naturally gold.

‘I could not believe my eyes’

But after another inspection by Mr Ross, and Press & Journal photographer Sandy McCook, as well as a Google investigation, they now believe the shell may have come all the way from Asia.

Mr McCook said: “It looks like pure gold, but it is made from a normal shell-like material. There is not a scratch on it.”

Mr McCook said the shell does look painted, but it is so perfect he does not think it is.

Star Wars superfan Mr Ross was taking his daughter to work in Nairn early yesterday morning when he decided to watch the sunrise on the pier.

The 50-year-old said: “I watched the sunrise and took a few photos when another photographer came along, so I jumped down onto the beach.

“It was low tide and from there I could see lots of shells. I collect shells. In fact, I was hoping to build a stormtrooper’s mask out of shells.”

He continued: “I saw a shell I liked because of its size and I pulled it up out the sand. I then saw the gold shell, glowing in the early morning sun, and I really could not believe my eyes.

“I lifted it out the sand and it was completely golden.

“I felt like Charlie, out of Charlie and the Chocolate factory, like I had won the golden ticket. I could not believe it.

“When I picked it up it reminded me of that scene in Star Wars where the droid finds a part on the beach and asks if it is C-3P0. For a moment, I thought that maybe this shell was part of C-3P0.

“But,” he joked, “of course it was just an amazing shell.”

Of his find he said: “If anyone who knows about it would like to have it to see it – to tell me what it is – I would be delighted.”

He added: “I was on Nairn’s East Beach at low tide and I was just in the right place at the right time.”

We have asked scientists at the Scottish Association for Marine Science to help Mr Ross identify the shell.